In 1943, a 15 chapter serial was released with Lewis Wilson as Batman and Douglas Croft as Robin. In 1949, another 15 chapters is released, with a new Batman and new Robin. (With Robert Loury and Johnny Duncan.) Why these serials are still remembered is that they didn't really shy away from the fact that Batman was still a dark character (and still is) even then! But what was quite peculiar about these serials was that they took Batman and Robin and made them soldiers. So it wasn't about Batman's one man ride to clear up the streets of Gotham, it was about Batman and Robin being soldiers of war. They worked for the government! There were two major changes that these two serials brought to the character. The first one was Alfred. Because in the comic books previous to this, Alfred was only a short, stubby bald man. But in the serial, William Osten (the man who played Alfred) was tall, skinny with a moustache. The normal, iconic look for Alfred. The next major change was the Batcave. But, 'the Batcave' in the serials was a couple of armchairs and a big table that Batman would sit at every night, thinking about whatnot. So yeah, it definitely wasn't all there yet. And i won't even get started on the war- time racism. If you don't know what i'm talking about- then watch it. It's racist. But it wasn't just the Batcave that the serial brought. It was the fact that Wayne Manor was over the Batcave (an aspect that is still used today.)

Anyone who knows anything about Batman would have at least heard of the campy and over- the- top movie that was the 60's Batman movie. One of the first superhero movies ever made, it brought out funny, campy and insane versions of the dark knight that had never been attempted before. Just like Kiss is to rock, this is the grand- daddy of superhero movies. It brought Batman's never- ending gadgetry (including batarangs and the infamous shark repellent) to new, exciting hights. Though the movie was influenced by the comics, the movie influenced the comics, too. It took Batman to new directions. But it also helped to shape two of the most powerful Batman villains- The Riddler and Mr. Freeze. Before Frank Gorshen's (in the 60's movie) iconic take on The Riddler, The Riddler was a very minor villain in the comics. The movie made The Riddler one of the most intelligent Batman villains. You won't believe how much change the series (the series that the 60's film was based on) brought to Mr. Freeze. If it wasn't for the series, i wouldn't be calling him Mr. Freeze. Yes, the series came up with the name of Mr. Freeze. Before, in the comics, he was known as Mr. Zero and he wore this god- awful purple jumpsuit that made him look like a failed clown. Stop copying off The Joker!

After the success of Superman: The Movie, fans couldn't care less about Batman. So, producer Micheal Oslen took a chance and bought the rights to the character. Because he wanted to make a serious version of Batman.But, it wasn't as easy as it seemed. Because Columbia said no. Then United Artists said no. Even Universal said no. But, Warner Bros gave a definitive yes. (Finally.) But the struggle definitely wasn't over yet. It took them another debilitating six years to find a script and a director that they liked. And another two years after that for Tim Burton (the director) to start filming. This long wait was mostly because of Burton wanting Micheal Keaton to play Batman. The fans had no idea what to expect from the prodominently comedic actor. Now, does anyone remember Jack Nicholson's joker? Of course we do, because it brought the comic Joker to life. But, before accepting the role of The Joker, Nicholson made a few...... demands. An enormous paycheck (from the profits of the film believe it or not) and he even got to choose his own shooting schedule. In fact, it is reported that Jack made over 50 million dollars just from that one film! But W.B. could afford it. Because the film made over 400 million dollars! So, three years later, a sequel film was released to Batman (Batman Returns.) But, in my opinion, Batman Returns is one of the most controversial comic book films. But back to the movie. Batman Returns had its issues coming into film. The biggest of this was the director. Burton (who hates doing sequels and hated how much studio influence the original Batman movie had) wanted to make the villains in his own image. Some fans weren't pleased. Mostly because of the gore and the overall darker tone of the film. It may not have been the best Batman film, but it did show that Burton had the god- given capability to take Catwoman and the Penguin (the main protaganists of the film) and deposit them in Burton's own cinematic world. Burton set the bar high for comic movies to come. And he will never be forgotten.

It brings great pain to me, but even the unforgivable movie that was Batman & Robin needs to be talked about- vaguely. I promise. Then we can get to the good stuff. First, let's start with Batman Forever. Which, unlike its sequel, is forgivable. Batman Forever is actually okay- apart from the very annoying fact that Robin is played BY A GROWN MAN!!!!!! Chris' O Donnel, to be exact. We have Val Kilmer as Batman, Tommy Lee Gun as Two- Face and Jim Carrey as Riddler. Even though the cast is respectable (as well as Nicole Kidman as Batman's love interest) the movie was pretty weird. The only reason people went to see the film was because Jim Carrey was in it. But, it was horribly fitted for younger watchers, and Two Face looked like he was wearing a half- made mask that a child would make as an activity in his pre- school. What's the point in stealing that much money if you can't even make yourself look like you mean business? You really want to know what he looks like? Something like this: 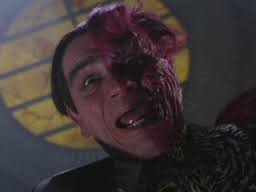 Well what do you know? It's already half way through it. The time flew didn't it? Just kidding. But get ready for Batman and Robin. The worst comic book movie ever made. Ever. Have you ever thought what Arnold Schwarzenegger would be as a Batman villain? Funny thing to imagine, right? Well, it happened. And there's not even any awesome Commando to go with it. Instead, we got a bald Arnie, who makes his henchman sing Christmas carols and the biggest slap in the face of all: his dastardly puns and one liners. I'll show you the compilation video: And beware the weird suiting up in the beggining of the video. (Bat- nipples and bat- ass.) We also has Uma Therman as Poison Ivy, and G. Clooney as Batman. So at least we have two decent actors, right? NO. They acted horribly. And that's why I hate the Joel Shumacher Batman movies. Their whole existence was just to sell more toys. Well done D.C. You really killed it with these two movies.

Well, who's ready for heaven? C. Nolan's Dark Knight trilogy brought it. And made Batman great again. Let's start with Batman Begins. In 2005, movie Batman had been massacred because of the above, and then BAM! Nolan came out of nowhere. And he made a Gotham in his vision. And he made Batman's origins in his vision. And he made Batman in his vision. I won't spoil the story for those of you who havn't watched it, but get ready for a much more human and realistic Batman, that only the genius of Nolan could master in the form of The Dark Knight trilogy. Batman Begins took a real good look at Batman's origins, while throwing a compelling story when Batman made his way back to Gotham. Detective Gordon (he becomes commissioner in The Dark Knight) is played well by Gary Oldman, while Alfred is more closer to Bruce Wayne than ever, with an outstanding performance by Micheal Caine. But, the best goes to Christian Bale, who played the Batman at his finest played yet- and it still is. The story was great, the antagonists played very well (Ra's al Ghul and Scarecrow), and we even got some Morgan Freeman! YEAH!!! MORGAN FREEMAN!!

If you thought Batman Begins was good, check out The Dark Knight. (If you want to change subject and learn about the Justice League, then check out my mates website- his name is George. So, click George's Website.)

There really isn't much to say about this film. Apart from the fact that its my favourite film ever made. It was smart, a few scenes were funny and it had a certain someone who made the bridge of normal mad, then Joker mad. This man's name was Heath Ledger. And he's Jokers face. Heath Ledger played the role as if he were The Joker himself. He brought the mad man to life. He even got an Oscar for it. Sadly, Heath passed away during filmimg. Another film he acted in is "A Knight's Tale." A really great film too. Half of it because of Heath Ledger too. Even though The Dark Knight was my favourite film, it's still widely known as the best comic film of all time. And one of the best films of all time. Had enough? Good. GO SEE IT!

We are unfortunately at the last movie of Christopher Nolan's outstanding Dark Knight trilogy. And it didn't dissapoint. The Dark Knight Rises showed an aged Batman against the maniacly insane, but intelligently creepy Bane. But one thing i really liked about this installment was that it took the super- strong aspect of Bane away completely. So Bane was just a man with a breathing mask. Another showing of Nolan's ability to put a different take on the chararacter's abilities.

We are now at 2016, and Batman v. Superman: Dawn of Justice is grabbing hold of the English audience and not letting go. Unlike many other viewers, i find that this really wasn't bad at all. There is still a solid performance by Jesse Iesenberg as Lex Luthor and Ben Affleck as Batman. Even though it wasn't spectacular, it was still a solid film through and through, with a few awesome surprises along the way.